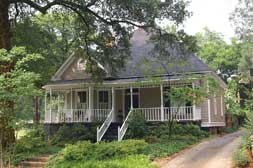 The area now known as Hampton-Pinckney was purchased in 1815 by Vardry McBee who spent $27,550 for 11,028 acres of land in what is now the center of Greenville. McBee had great aspirations for the little frontier village of Greenville and played an important role in the city's development. A true philanthropist, he donated land for the Greenville Male and Female Academies and for the city's first 4 churches. The first house in the area was built by McBee's son Pinckney, prior to the Civil War. In the 1890s, part of the land McBee willed to his family was subdivided into residential lots. Cotton growing, selling and production were important to the economy as was the railroad terminal nearby. Hampton-Pinckney became the first "trolley car" neighborhood in Greenville.

It was also a period of rapid expansion for Greenville's textile industry. Today the Hampton-Pinckney Historic District, one of the oldest in town neighborhoods, has the most important representation in the city of fanciful, sometimes exuberant dwellings of the Victorian Era. During the First World War, the production of cloth for uniforms and other war materials kept the mill industry thriving. The resulting strong economy paved the way for another building boom in the early 1920s. The Hampton-Pinckney neighborhood was still growing, but other new neighborhoods also began to take root and thrive. The district was named to the National Register of Historic Places in 1977, becoming Greenville's first National Register District. In 1977 the neighborhood became the first locally designated Preservation Overlay District.

For more information, visit the Hampton-Pinckney website or view this video of the Hampton Pinckney Historic District.